So there would be a photo but we ate them all.  Whoops!

Clean and slice the leeks finely-- I cut them in half lengthwise, then slice them as finely and quickly as I can-- and reserve.

Mix together the rest of the ingredients with a whisk or a fork until well-combined, then fold in the leeks.  There should be roughly equal amounts of batter and leeks, and when mixed together, there batter should completely coat the leeks.

Heat oil in a pan or on a griddle until almost smoking and then drop in fritters-- you want to use a significant amount of oil, because these are honestly best fried.  Use about 1/4 c. of batter at a time.  When one side is browned, flip.  Remove to a plate with a paper towel on it and repeat until all the batter is gone.

Mix everything together.  Nom with the fritters.
Posted by Hedgerose at 11:25 PM No comments: 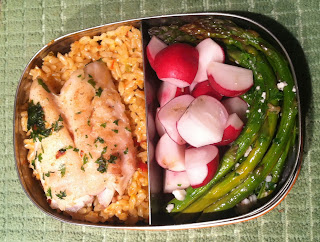 Everything is from within a 100-mile radius of where we live except for the pepper (on the asparagus and snapper) and red pepper flakes (on the snapper).  I’m not sure about the tomatoes— they’re the ones we bought off the back of a truck, so who knows.


No recipes tonight unless I get a request-- everything is fairly simple.
Posted by Hedgerose at 11:20 PM No comments:

The genesis of this recipe came from this week's farmer's market and Garden Variety Cheese-- we were tasting their samples and the woman working at the booth suggested that we make risotto with one of their cheeses: Hollyhock, which their website describes as "a raw sheep cheese aged for at least 8 months."  It melted into the risotto very well, and gave it a pleasantly mild taste.

I've found that while risotto isn't necessarily difficult, it does require a lot of patience.   I first learned to make it from my dad, who is in no way Italian-- so if this misses the "traditional" mark, I'm sorry!  The leeks I used (thick as my wrist and about four feet tall, including the ends of the leaves) are also his. 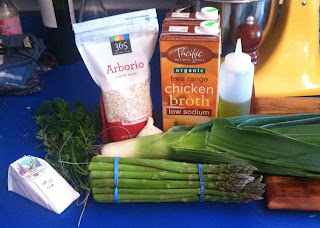 Prep: clean and half-moon the leeks.  The easiest way to do this is cut off the tops and remove the outer layer, then cut in half and rinse under cold water.  Dice the onion and mince the garlic and herbs.  Snap the bottoms off the asparagus and then cut into one-inch pieces.

Heat olive oil in a large nonstick pan over medium heat; then, add the leeks, onions, garlic, herbs, salt, and pepper.  Cook all until the onions and leeks are limp and translucent.

Add the rice.  Stir continuously until the rice is just barely translucent around the outsides of the kernel-- you may need to add a bit more oil.  Once the rice is at that stage, add the cooking sherry and stir until it's fully absorbed.

The next step is to add the chicken broth: do so slowly, about half a cup at a time.  Each time you add broth, stir until the broth has been absorbed (but not so long that the rice gets dry).  This is the part that takes patience, so try not to get frustrated: it'll be worth it, I promise.

Once you have about half a cup of broth left, add the asparagus.  You can either add it directly to the risotto or sautee it briefly beforehand in olive oil, salt, and pepper.  If you choose to sautee it, don't cook for longer than 3-4 minutes-- it'll finish cooking with the rice, and overcooked asparagus isn't fun for anyone.

After all the broth has been added, turn off the heat and fold in about 3/4 c. of the grated cheese.  Garnish with the rest of the cheese and a little more minced herbs, if you have any left.

Serves 4-6 as a main course, or more as an appetizer/side. 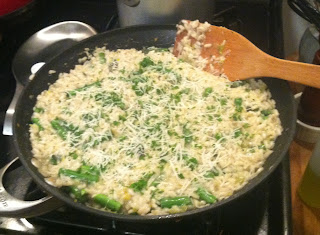 Posted by Hedgerose at 8:53 PM No comments:

Email ThisBlogThis!Share to TwitterShare to FacebookShare to Pinterest
Labels: cheese, gluten-free, recipe, things that could totally involve bacon and possibly be better for it, things that don't involve bacon

So hi, it's been a while!  It's been nearly a year since I updated this thing-- and every time, I say I'll be better about updating, so really, who knows.

I've started a new job at River Cafe (not the one in New York), so I've been cooking a lot more, overall.  Mostly a LOT of sandwiches, because that's primarily what we serve, but also side dishes and breakfast burritos and I've actually learned to be pretty decent at making coffee drinks, which I suppose is a good skill to have, for all that I don't actually like coffee.

I've been experimenting at home with the crock pot more than I used to (which is to say, not at all), so tonight's recipe comes out of that.  My sister-in-law is gluten-free, so we've been doing a lot more wheat-free meals; we had this with cornbread made from a Gluten-Free Pantry mix (available here), which is deliciously buttery.  I had mine with strawberry jam I canned last summer-- we're just starting to get strawberries here, and I'm looking forward to making another batch of it soon.

1 can each pinto, black, and kidney beans (you can also cook these yourself from dry beans, but I didn't have time do do so).
2 tbsp. oil
1 small red onion, diced
3-6 minced cloves garlic, depending on how much you like it.
1 tsp. red pepper flakes
1/2 tsp. cumin
1/4 tsp. black pepper
1 lb. ground beef
2 chorizo sausages (about 1 lb. of meat-- I split the casings and just used the meat; you could also slice them once they're cooked)
1 12-oz. can tomatoes (or about 3-5 medium tomatoes, pretty much any variety)

Drain the beans of most of their liquid-- you will want some remaining (about 1/2 c.)  In a slow cooker set to low, combine the beans and stir together.  Cover and let warm.  (You could also do this in a dutch oven or heavy-bottomed pan over low heat.)

Heat the oil in a medium or large saucepan over medium heat; once it's warm, add the onion, garlic, red pepper flakes, cumin, and pepper.  Cook, stirring frequently until the onions are translucent, then add the ground beef and the chorizo.  Break up the meat and cook until it's no longer pink, then add the can of tomatoes.  Stir to combine, then add all of the meat/onions/etc. to the slow cooker.

Combine all ingredients and turn the slow-cooker up to high for an hour.  Turn to low and let cook for another hour.

Serves 8 (more if you're not super hungry, less if you are!)

Posted by Hedgerose at 12:12 AM No comments:

Okay, so this is really incredibly simple, but it was also tasty and ended up fairly pretty, so have a recipe!  This would probably serve at least three, especially if it, you know, went with vegetables of some kind. 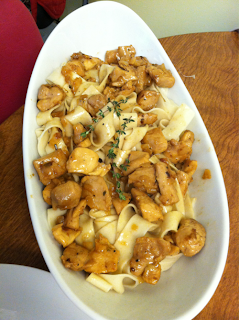 Pasta-- I used pappardalle from the Santa Cruz Pasta Factory

In a medium saucepan, saute the onions and garlic in the olive oil until the onions are just starting to caramelize, then add the chicken, lemon juice, white wine, butter, salt, pepper, and thyme.  Simmer until the chicken is thoroughly cooked and the liquid has cooked down some.

Toss everything together and top with as much cheese as you feel like eating.  Enjoy!
Posted by Hedgerose at 8:24 PM 1 comment: 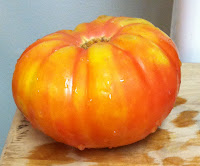 It's been a very long time since I posted here, due to a combination of moving and having not a lot of money to buy fun food with. But now I'm back! I'm living in Willow Glen with my friend Ria (of Wildwood Yarn), and I've finally figured out where the good farmer's market is in this area (Campbell, if you were wondering)!

I've just started a batch of tomato sauce that I'm making with some heirloom tomatoes I picked up for $1/lb (!!!) at the market. I'm really excited about cooking this week, especially since I also got some butter and a WHOLE CHICKEN. Om nom nom.

But before that, raspberry jam!

Posted by Hedgerose at 8:08 PM No comments:

Email ThisBlogThis!Share to TwitterShare to FacebookShare to Pinterest
Labels: canning

Chop the nectarines in a food processor until mostly smooth but still slightly chunky-- a smoother blend will give you smoother ice cream, but chunks of nectarine are pretty pleasant.

Mix the milk and sugar together until the sugar is mostly dissolved into the milk. Add the salt and the cream and stir until well-blended. Add in the processed nectarines and stir until they're incorporated.

Chill the ice cream in the fridge for at least half an hour or up to overnight, then freeze according to ice cream maker instructions.

You could probably add a few more nectarines, which would give it a stronger fruit flavor without affecting the texture that much.

There would be pictures, but we ate it all.

This is a modified recipe (originally for Fresh Strawberry Ice Cream, which I also made tonight) from the Cuisinart Ice Cream recipe book that came with my ice cream maker.
Posted by Hedgerose at 10:16 PM No comments: